by Seaworthy and Radio Cegeste 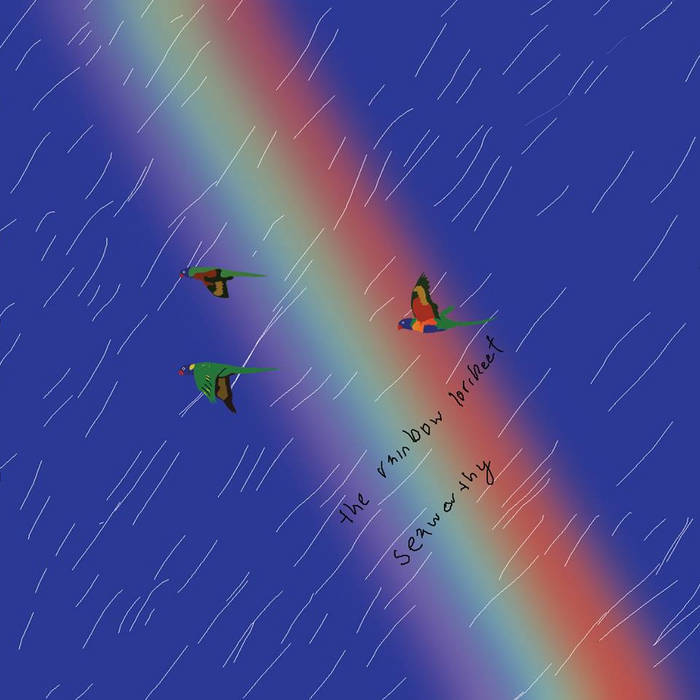 An urban winner and a bird which has come back from the brink of extinction are celebrated in the next two birds of a feather EPs by Sydney's Seaworthy and New Zealand's Radio Cegeste.

The Rainbow Lorikeet is one of Sydney's best known and most colourful birds. Its high pitched calls ring out from urban centres to rural retreats. They are indeed loud birds, as Cameron Webb, the man behind Seaworthy states, ''The racket they make is akin to screaming gangs of teenagers running rampant through the local shopping centre on a sugar fuelled high.''

Because of their noise, their abudance and the fact they like to hang out in gangs, the Rainbow Lorikeet prompts mixed feelings in Sydneysiders. Webb said based his piece on the premise that he hated the birds, but on spending more time with them he found himself reassessing. In his own words:
'' The recordings featured in this track were made early one morning amongst the banksia trees behind a coastal sand dune. There were a lot of birds about and they were noisy. They were also moving about between trees, flying in clusters of dozens of chattering birds. The sound they were generating was swirling and whizzing about and, against the backdrop of ocean drone, created a complex and textured wall of sound. I don’t mind music like this.''

The New Zealand Storm Petrel is as elusive as the Rainbow Lorikeet is obnoxious. Thought to be extinct for 150 years the Storm Petrel was rediscoverd 10 years ago. Critically endangered, the bird spends almost all its time at sea, only coming to land to breed. Its call has never been recorded, and a new breeding colony was discovered just last year. It is a bird of mystery. As Sally Ann McIntyre, the woman behind Radio Cegeste describes: ''The Petrels’ breeding place on Little Barrier Island has only been discovered this year, via radio transmitter tracking, by ornithologists from the University of Auckland. The call of this bird hasn’t yet been recorded, so I had no reference for it. It remains at the time of writing intriguingly aligned with the unheard and the unknown, the unlanguaged ocean. In the piece, I wanted to evoke the sounds of the earliest field recordings of birds, before the tape recorder was invented, and to think about these as models of how to evoke an indistinct, barely audible signal, coming back to our ears from 150 years ago."

Reviews
"The clear presence of the bird makes this one of the most effective entries in the Birds of a Feather series, as there’s no mistaking these cries. " A Closer Listen on The Rainbow Lorikeet by Seaworthy.

"It is a piece about paradise, if not for Sydney’s citizens, then all the more so for the rest of the world. " Ambient Exotica on The Rainbow Lorikeet by Seaworthy.

"The static field suggests magnetism and wax cylinders, the recording choices of a bygone era. As melodies gradually emerge from the ether, one imagines the surprise of discovery, of finding something where nothing was believed to exist." A Closer Listen on The New Zealand Storm Petrel by Radio Cegeste.